skip to main | skip to sidebar

Just to let everybody know, Estes
is coming out with some classic, classic rockets from years ago.

Some of the rockets are so incredibly old, my Father launched
them in his youth. Check out these beauties here:
Posted by Ron at 12:23 PM No comments:

Here is the question -

Suppose you got onto an airplane at noon ,
you fly for four hours, but when
you get off the plane, it is only
1:00pm. how can this be?

The person who answers this question
correctly will win a coupon good for ten percent
off your next purchase at Starbucks(restrictions apply).
Posted by Ron at 11:28 AM No comments: 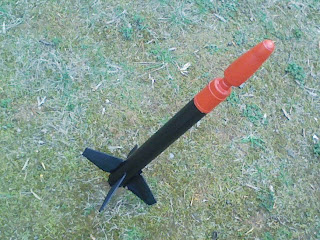 I am trying to come up with a name for my new home-designed and built rocket (see pic above):
Here are some ideas:
a) The Intercontinental Ballistic Missile (ICBM)
b) The Interceptor-E
c) The Terminal Velocity
d) The Peacekeeper
Which name do you like? Please let me know via Comments

This is the ascent of the Chrome Dome (from Friday afternoon's launch), a high-performance mid-size rocket with a powerful C6-7 engine. The C6-7 is my favorite regular sized engine. I like it better than the C6-5 because it has a longer coast phase. The 7 second time delay also makes it easier to recover my rockets, since after the 7 seconds the parachute deploys just a couple hundred feet above the ground.

To the launch pad!

We just got back from having a most successful rocket launch.
First up was the Mean Machine.
As is often the case, the breeze kicked up so we angled
the rod against the wind. First signs were good,
the rocket came off the pad as straight as an arrow.

As it turned out, the winds aloft were much weaker
then the winds at the ground, so after this launch
we gave the launch rod a more vertical orientation.
The next we launched the Mean Machine again.

The missile screamed to five hundred feet,
the parachute deployed, and the rocket
started to float toward the school
so i started to run to catch the rocket.

...And so on. Overall, we launched a whopping eight
times! The rockets launched were the Mean Machine,
Astron Outlaw, the Rascal, the Nasa Spaceship,and the Chrome Domes.
We held the flight de-briefing over some DQ ice cream!
Mark that as another succsessful friday night flight!

watch for videos, coming soon!
thanks to camera man Joshua.
Posted by Ron at 4:07 PM No comments:

Houston, We are Go on the Rocket Re-fit...

Thanks to time, patience, and skill,
I have fixed three more rockets: the Nasa
Spaceship, The Astron Outlaw, and, my favorite rocket, the six-foot tall
the Mean Machine.

With the first two rockets I fixed, All I had to
do was replace a burnt parachute and find a engine
cap for both rockets.

But the Mean Machine was in two pieces,
Parachute burned, Three fins missing, broken engine mount infrastructure, and
cracked body tube couple. But in sevral days I had fixed the rockets.
We are going to launch today, and we will keep you posted!


z-rocketman
Posted by Ron at 3:53 PM No comments:

My fleet, that is.

I have not been able to launch for a while now for several reasons. One is that the weather has not been suitable for launching.

Another is the Old Man my Pop has not been up to launching with me.

Also, my rockets have not been in good condition. All three of my Astron Outlaws have one or more fins missing. My NASA Spaceship has warped fins, my Blue Ninja has been sat on a couple of times (perpetrator shall remain nameless), etc.

I have fixed the Chrome Dome, though. I repaired the burnt parachute (long story) and I resupported the fins.

I hope I can have a launch soon. I'll keep you posted! 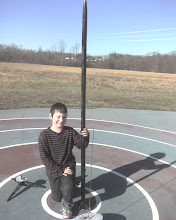